10 Past Champions to Compete in Senior Amateur

10 Past Champions to Compete in Senior Amateur

OMAHA (May 29, 2019) -The field is set for the 21st Nebraska Senior Amateur Championship at Wilderness Ridge Golf Club in Lincoln, June 3-4, and a full field of 78 players will compete, including a record 10 past champions.

The stacked field includes those 10 former winners, who together hold 14 of the 20 trophies handed out in the Senior Amateur's history. They are led by the defending champion John Sajevic of Fremont, who rolled to his record third title last year at ArborLinks in Nebraska City, setting a few more records on the way. His final round 66 (-6) set the championship scoring record, and led to a nine-stroke victory, which shattered the record for winning margin, which was previously five strokes. 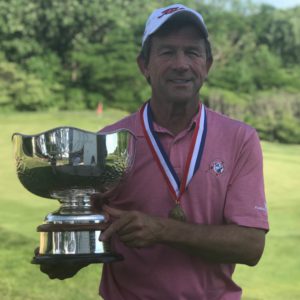 A couple two-time champions are also in the field, in Steve Samuelson of Waterloo (2012 & 2013) and Mike Krumland of Columbus (2006 & 2014). Samuelson is trying to match his fellow Fremont Golf Club member Sajevic with a third title, while Krumland is looking to add his record seventh NGA senior title. Krumland already owns four Nebraska Senior Match Play trophies to go along with his two Senior Amateur wins.

The championship features 36-holes of stroke play competition over two days, June 3-4, and will be played at Wilderness Ridge for the first time. The par-71 layout will measure 6,719 yards for the Championship Division, with age divisional and net competition also included. Play begins Monday with starting times off Nos. 1 and 10 from 8 a.m. - 10 a.m. First Round pairings are now available on the championship website at the button below.