First Round Conducted Monday at Happy Hollow Club in Omaha

OMAHA (July 27, 2020) - It was a record-setting start for Omaha's Grant Jabenis at the 112th Nebraska Amateur Championship at Happy Hollow Club in Omaha, and he holds a significant lead after the first round.

Jabenis caught fire mid-way through his round, and posted the lowest round in a Nebraska Amateur at Happy Hollow Club. The club has hosted the championship 16 times, but this is the fifth time since the format changed to stroke play in 1956. Jabenis made five birdies during a bogey-free 66 (-5) and leads by four strokes. The previous low round belonged to Elkhorn's Ryan Nietfeldt, who shot 67 (-4) in the opening round in 2010. 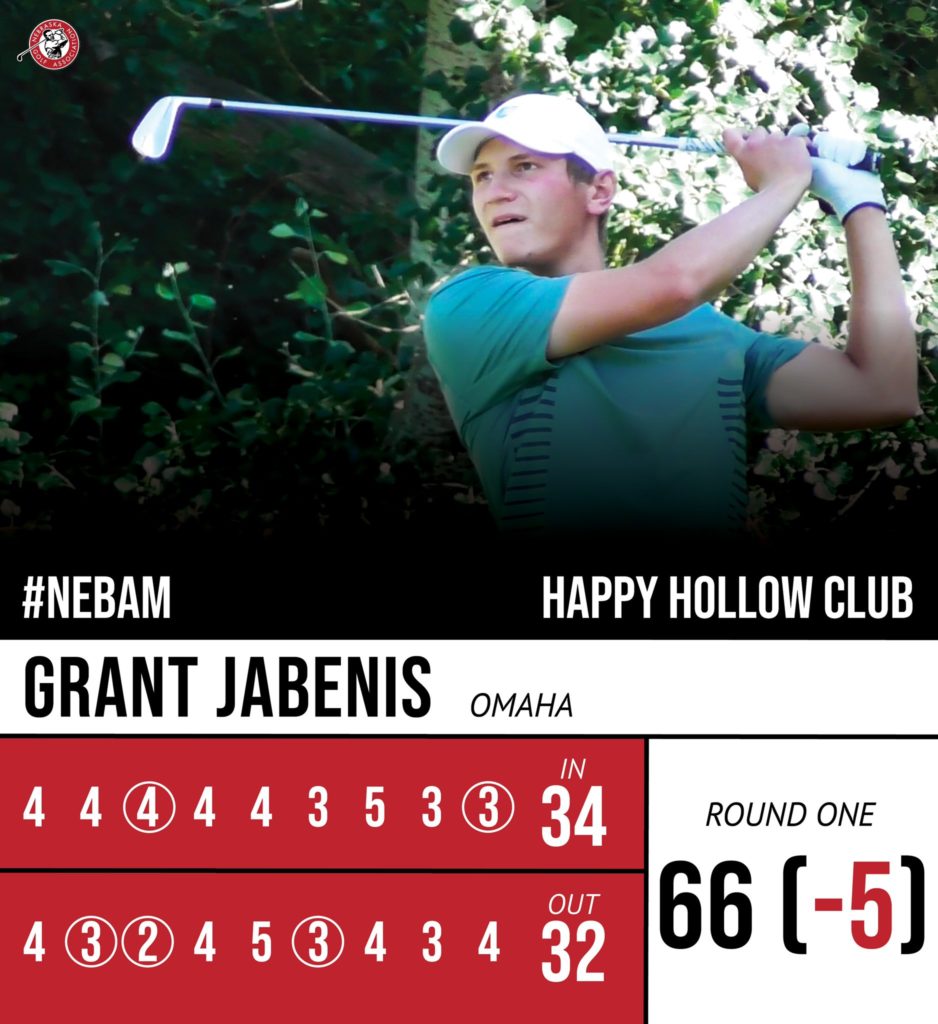 The Omaha Westside graduate who now plays for Iowa Western made an early birdie on the par-5 third hole, typically the club's 12th hole with the nines switched for this championship. Jabenis then closed his first nine holes with another birdie to turn in 34 (-2). He stayed hot with birdies on Nos. 11 and 12, and added another on No. 15 to get to 5-under.

Jabenis stuck his approach shot on No. 18 to about five feet and had a putt to tie the lowest first round score in Nebraska Amateur history. His putt just missed on the high-side and he tapped in for his 5-under round.

Four other players broke par today, and they all sit tied for second behind Jabenis with rounds of 70 (-1).

Josh Bartels of Lincoln got off to a quick start, birdieing the first hole. The Omaha Maverick went on to make another birdie at No. 13, and only a bogey on No. 18 stood between him and solo second place.

Calvin Freeman of Table Rock played a rollercoaster of a round today. He paired four birdies, three of which came on the front nine, with three bogeys to put together his 70 (-1).

Three-time champion Andy Sajevic is in the hunt after the first round with his own 1-under round. He tacked two birdies on the card, one on No. 3 and one on No. 14, and only a bogey on the fifth hole kept him from a two-under day. Sajevic won the last time Happy Hollow hosted the Nebraska Amateur in 2010, the first of his three wins in four years.

Blake Giroux of Bennington is the final player tied for second. He carded three birdies in a row on holes No. 5-7, and added two more on the back nine. He tacked on two bogeys on each side to shoot 35-35.

Tom Westenberger of Lincoln is in solo sixth after shooting the only even-par round of the day. The Husker golfer played his first two holes of the front nine at 2-under, and added one on No. 10. He also made three bogeys to finish at even-par.

Ten players are tied for seventh at 72 (+1), including last year’s runner-up, Caleb Badura of Aurora. The other players in that tie are Alex Kubik of Aurora, Jay Moore of Lincoln, Eric Peel of Omaha, Titus Tvrdy of Omaha, Trent Morrison of Omaha, Josh Wilson of Papillion, Vance Janssen of Blair, Johnny Spellerberg of Bennington and John Lapour of Omaha.

Round Two begins at 8 a.m. off both No. 1 and 10 tees on Tuesday, after which the field will be cut to the low 60 scores and ties for Wednesday and Thursday's rounds. Full results, along with groupings and starting times for Round Two are available on the championship website below, along with additional information.