The Championship will begin on Monday, June 6 with an 18-hole Stroke Play Qualifier, with 36 girls competing for 16 spots and 90 boys competing for 32 spots in the match play bracket.

Two rounds of matches will be conducted on Tuesday, followed by two more on Wednesday. The girls' final is scheduled for Wednesday afternoon, while the boys' final is Thursday morning.

There will be a new champion crowned on both sides, as no past champions are in the field. On the girls’ side, Lauren Thiele of Wahoo is dealing with an injury and will not return to defend her title. On the boys' side, the reigning champion, Christopher Atkinson of Omaha, is in college and no longer eligible. 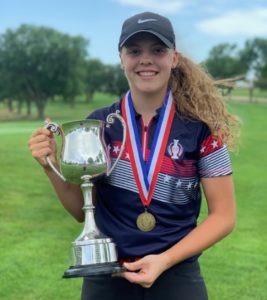 There are a couple NGA champions in the girls' field, including Katie Ruge and Kaitlyn Hanna of Omaha. Ruge won the Nebraska Women's Match Play title in 2020, while Hanna won the 2019 Nebraska Girls' Amateur. 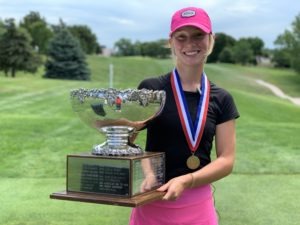 Other notable players set to compete, include the 2021 NSAA Class B Champion Julia Karmazin of Omaha, and her older sister Emily Karmazin. The NSAA Class C Champion Cecilia Arndt of Columbus is paired with Julia Karmazin and Hanna, who finished runner-up in Class A. Scottsbluff’s Emily Krzyzanowski, and North Platte's Karsen Morrison are also looking for a first title. 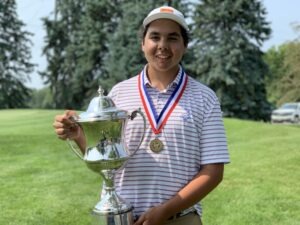 Three NSAA high school champions are in the field, including Thomas Bryson of Lincoln, who won the Class A title as a freshman at Lincoln Southeast last month. Will Mullin of Omaha (Class B) and Noah Carpenter of Lincoln (Class C) are also set to compete, and will tee it up alongside Bryson in Monday's Stroke Play Qualifier at 8:50 a.m. off No. 10.

A couple of Kansas-Nebraska Junior Cup team members from last year are also vying for their first title. Kearney's Cole Feddersen and Hastings' Brayden Schram are top contenders. Coltrane Mittag of Ashland is another young player to watch, as he qualified for the 2021 U.S. Junior Amateur and played well at U.S. Open Local Qualifying last month.

It will be the first time hosting either championship for Platteview Golf Club, although the club has hosted several other NGA championship, including the 2021 Nebraska Senior Amateur. The par-72 course will measure 6,640 yards for the boys and 5,860 yards for the girls.

Groupings and starting times for Monday's Stroke Play Qualifying round are available under the Pairings tab of the championship websites below.