FREMONT (October 13, 2019) – The 2019 NGA Fall Junior Series concluded with the Explorer at Fremont Golf Club on Sunday, and 4 Putts Are Cool took the team title, but PIN SHOT secured the overall Team Champion title for the series.

The Explorer competition was close, as 4 Putts Are Cool won the team race by three strokes over two teams. The team of Richard Orth III of Omaha and Geran Sander and Connor Podliska of Lincoln finished with a 153 (+11) total to take the last title of the 2019 Fall Junior Series. Orth led the team with a round of 76 (+5) that included six birdies. He finished third individually, while Sander was just a stroke back in a tie for fourth at77 (+6). Podliska was tied for 37th at 96 (+25). The team added to its runner-up finish in the first event this fall and finished second in the overall team standings. 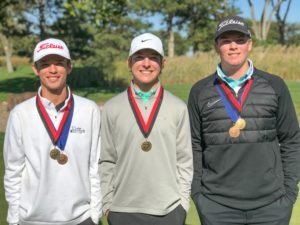 PIN SHOT took the top spot in the overall series team race, needing just a fifth-place finish at the Explorer to clinch the title. The team of Rex Soulliere, Jacob Hellman and Porter Topp of Omaha finished with a 163 (+21) total to earn enough points to edge 4 Putts Are Cool by 50 points for the series, 950-900. PIN SHOT won the first event of the series, the Frontier, and tied for runner-up honors in the second event, the Pioneer. The three team members were awarded with new Bushnell Ion 2 GPS watches for their efforts.

Catholics vs. Convicts and Weapons of Grass Destruction tied for second in the team competition with totals of 156 (+14). Catholics vs. Convicts was led by Luke Gutschewski of Elkhorn who finished second individually with a 75 (+4). Omaha’s Charlie Zielinski contributed an 81 (+9) for the team that finished third in the team standings for the series. Omaha’s Josh Kramer led Weapons of Grass Destruction with a round of 77 (+6) to tie for fourth individually. Jack Truscott of Omaha added a 79 (+8) for the team and tied for ninth, while William Buechler of Omaha shot an 89 (+18). 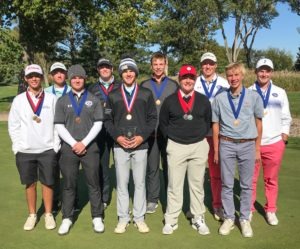 Grand Island’s Marcus Eriksen shot the low round of the day to win the individual title with a 74 (+3). Eriksen recorded five birdies in his round to capture the win by a stroke over Gutschewski. Papillion’s Noah Miller finished tied for fourth at 77 (+6) with Sander and Kramer, while Omaha’s Teddy Peterson and Hooper’s Jake Hagerbaumer tied for seventh at 78 (+7). Omaha’s Jake Boor shot a 79 (+8) to round out the top 10 in a tie for ninth with Truscott. 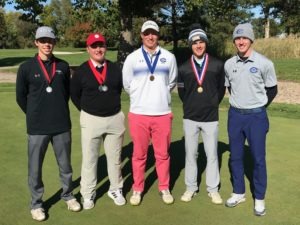 The FJS All-Star Team was also announced after play and is headlined by Kramer, the Team Captain. Joining Kramer on the team is Gutschewski, Eriksen, Soulliere and Zielinski. Kramer is senior and Soulliere a junior for Omaha Creighton Prep. Gutschewski is a junior at Mount Michael in Elkhorn, while Eriksen is senior at Grand Island Northwest. Zielinski is also a senior and attends Omaha Skutt Catholic.

Full results and more are available on the FJS website at the button below.