The team of Omaha’s Rex Soulliere, Porter Topp and Jacob Hellman grabbed the win by one stroke on a breezy day with a 155 (+11) team total. Soulliere led the team with a round of 74 (+2), which left him in a tie for third in the individual race. Topp posted a round of 81 (+9) to contribute to the team score, while Hellman finished with a 91 (+19). 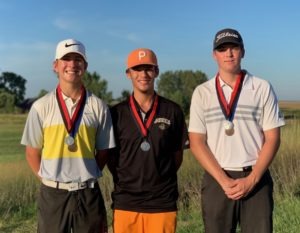 Omaha’s Josh Kramer won the individual title, tying for the low round of the day with Omaha’s Charlie Zielinski. Both players shot an even-par 72 and a playoff ensued. Kramer hit his drive just short of the par-4 10th green, the first playoff hole, and converted his up-and-down for birdie to secure the win. Kramer is a senior at Omaha Creighton Prep, while Zielinski is a senior at Omaha Skutt Catholic. 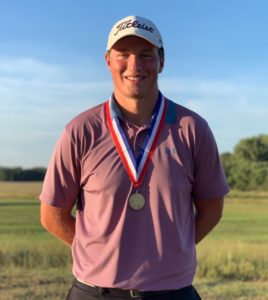 Marcus Eriksen of Grand Island and Cole Feddersen of Kearney tied Soulliere for third with rounds of 74 (+2). North Platte’s Jayden Jones was sixth with a 76 (+4), while Nolan Johnson of Gretna shot a 77 (+5) to tie Podliska for seventh. Papillion’s Mason Burger finished ninth with a 78 (+6), and Sander rounded out the top 10.

The Fall Junior Series continues on Sunday, September 22 at Fremont Golf Club with the Explorer. Full results and more are available on the FJS website at the button below.