LINCOLN (September 25, 2019) – Lincoln’s Ed Wyatt grinded to stay within striking distance and struck when he had the chance to win the 9th Nebraska Senior Match Play Championship at Hillcrest Country Club on Wednesday.

The No. 1 seed Wyatt came from behind to defeat Fremont’s John Sajevic in the Championship Final, 1 up. Wyatt trailed the entire match until the 18th hole, coming back from a 3-down deficit to win the final two holes and take the title. Wyatt was a long-time assistant professional at Hillcrest Country Club (1988-2000) before he regained his amateur status in recent years.

Wyatt had cut Sajevic’s lead to 1 up heading to the 17th hole, where Wyatt found the fairway and green, and converted a routine two-putt par. Sajevic hit a great recovery shot from the right trees onto the back portion of the green, but he three-putted from there for bogey, tying the match. Wyatt then hit two great shots on the par-5 18th hole to find the putting surface in two, leaving him with about 15 feet for eagle. Sajevic clipped some trees with his second shot, and eventually conceded the hole and match after his chip for birdie didn’t fall.

Sajevic took the lead from the start, winning the opening hole with a par. He followed with about a 35-foot putt for birdie on the par-3 third hole to go 2 up. His approach shot on the par-4 fifth hole settled to less than a foot for a conceded birdie and a 3-up lead. Sajevic had a chance to push his lead to 4 up on No. 6, but a three-putt kept his lead where it was. That opened the door for Wyatt, who won the seventh hole with a birdie and the eighth with a par.

Sajevic, who owns four Nebraska Senior Amateur titles but has yet to win this championship, won the ninth hole with a great par save to make the turn with a 2-up lead. However, Wyatt came right back to win the 10th hole. Sajevic was nearly flawless off the tee and with his approaches, but starting on No. 12, he missed four straight birdie attempts from 15 feet or closer. His putter let him down again on the 16th and 17th holes with a chance to put the match away, and Wyatt capitalized to win the last two holes and capture the title. 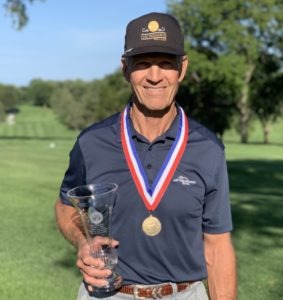 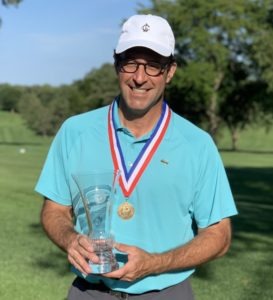 Winners were also crowned in the other three brackets. In the President’s Bracket, Lincoln’s John Fecht defeated Elkhorn’s David Allen in the final in 19 holes. It was Fecht’s second match to go 19 holes on Wednesday. In the Bob Astleford Bracket, Omaha’s Hap Pocras won, 2 and 1, over Kearney’s Scott Maline. In the Sam Reynolds Net Bracket, North Platte’s Steve Thomalla defeated Ashland’s Vince Takacs in the final, 3 and 2.

The final brackets and more are available on the Senior Match Play website at the button below.